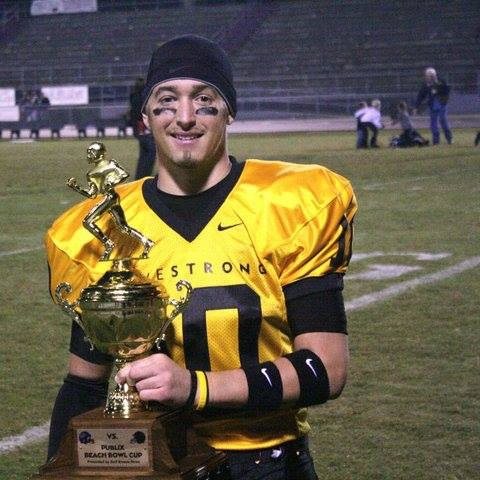 On the 10th Anniversary of Ian Lockwood’s passing, once again I would like to share the story that I wrote with all of you. I hope that the memory of Ian continues to live on.
Another trip down memory lane, Ian Cole Lockwood…
The 2010 Navarre Raider season started off with a shutout win over Fort Walton Beach, 14-0.
In week two, the Raiders found themselves down to the Walton Braves at home at the half, 29-13. The defense stepped up and held the Braves to a single TD, and the offense outscored Walton, 29-7 in the second half, for a 42-36 come from behind win. They held the ground attack of Walton to minus 34 yards rushing on 19 carries. Navarre, 2-0!
In Game 3, the Raiders hit the road and suffered a 42-21 loss to the Catholic Crusaders. This loss would eventually count as a “W” due to a forfeit by Catholic for playing an ineligible player.
The next week, Navarre would go on the road, the second of a 3-game road trip, this one against Louchiez Purifoy and the mighty Pine Forest Eagles. The home team would prevail, 33-13 and Navarre fell to 3-1. Little did they know that this would be their last regular season loss.
Navarre ended their 3-game road trip with a 42-0 win over Crestview and improved to 4-1.
Back home to the friendly confines of Bennett C. Russell Stadium in Week 6. The wheels were starting to turn for this Raider program…a 49-20 win over Milton. Raiders raised their record to 5-1.
But that was not the story of this contest…a young man from Navarre was fighting for his life (brain tumor). The Doctors told him that he would never take the field again to play for the Raiders. Do you think that this prognosis stopped Ian Lockwood from playing his final game as a Raider…you are right, it did not!
Ian would score the final two TDs of his lifetime, at home in front of the Raider Nation. See, Ian was a fighter and he would never go down without a fight. I broadcast his last game and it was hard for me to keep a dry eye.
Over the next four weeks, the Raiders would secure victories over Escambia at home 51-7; on the road at Pace, 31-21; at Tate, 41-6, and at home against Gulf Breeze, 34-24, to end the regular season at 9-1 and clinch the Raiders 3rd trip to State Playoffs.
All the while, Ian continued to grace the sidelines, despite the pain that he was suffering. His Mom, Denise stated, “he loved being on the sidelines where he coached and helped his teammates.”
This young man’s fight brought an entire community together and eventually the entire Emerald Coast came to know how special this young man was…
Navarre would venture into the playoffs and their first stop was a tough one, at Niceville. The Raiders would come out on top, 28-7.
Week 2 of the Playoffs, they would travel to Pine Forest, a place that gave them their only loss of the regular season. The Raiders found themselves down late to the Eagles, 18-14, and the home team was driving to seal up the win. Louchiez Purifoy took over that last drive, but when he tried to fight for extra yardage, he fumbled the ball and the Raiders recovered at their own 10-yard line…setting up Navarre’s 90-yard game winning drive.
With just over two minutes to play, the Raiders were successful on two fourth down conversions to keep the drive alive. QB Colton Kane would then find WR Brad Leggett wide open across the middle of the field on a 30-yard scoring strike to give Navarre a 20-18 lead and the eventual victory.
Next up, Navarre’s first trip to the Region Finals against Lincoln. Unfortunately, the Raiders dream season would come to an end in a heartbreaking, 34-33 loss in triple overtime, ending Navarre’s season at 11-2.
During the Playoff run, one thing that was constant on the Raider sideline, Ian Lockwood was there to cheer on his teammates, the same young men that he grew up with during his NYSA Football days.
The battle for Ian was starting to get tougher every day. The trips to Gainesville with his family were starting to take a toll on him.
But during those trips, Urban Meyer and the Florida Gator football team befriended Ian and the Lockwood family. Ian even received the game ball in the Gators Bowl Game that year in Tampa.
This young man fought to the final bell, with no regrets. With his family and teammates by his side, Ian passed away on 28 January 2011.
I remember the day of his Memorial Service quite well…the rain would fall; but that would not dampen the spirits of a community brought together by one of their own, Ian Cole Lockwood. Both sides of Bennett C. Russell Stadium were filled with not only Raider faithful, but parts of the entire Panhandle Region. Florida Gator Head Coach Urban Meyer, Bob Tebow and strong safety, Ahmad Black were in attendance as well.
On this day, his Raider teammates would march slowly onto the field carrying his jersey with the song Black and Yellow bellowing in the background. This was a fitting tribute to a young man who lived each day of his 18+ years to the fullest, despite his many medical setbacks.
Ian wore #10 and he would be the last Raider to wear this number. This number is the only one retired in Navarre history.
“Live for Today, Fight for Tomorrow, Live Strong”
Class of 2011, RB/WR Ian Lockwood, #10.

Next game will be at West Florida on Tuesday.
Final from the Pitch…21 Jan 2021
Gulf Breeze 4, Navarre 2
Lady Raiders fall to 7-6-1.
Navarre Goalkeeping

Navarre WR AJ Arno, Class of 2021, has received an offer from D3 Loras College in Dubuque, IA. The Duhawks are a member of the American Rivers Conference.